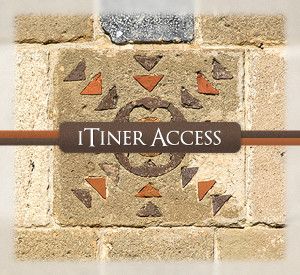 The Accessit Project: Cultural heritage itineraries, is a project co-financed with the European Regional Development Fund coordinated by the Autonomous Region of Sardinia, the Region of Tuscany, the Region of Liguria and the Corsican Territorial Collectivity which aims to create and develop an integrated strategy of management, preservation and enhancement of the national and cultural heritage in both Italian and French.

The goal is to help the creation of a net which transcends national borders between Italy and France for the promotion of local cultures, in a local sustainable development. A big common Tyrrhenian itinerary is also contained in this project, and it will allow to restore the declined heritage, to build accomodations for tourists and information for visitors, especially for people with a disability or reduced mobility.

In the ACCESSIT Project, iTinerAccess is a special intervention made by the Province of Cagliari which designs to improve the level of accessibility of its Pisan-Romanesque churches.

The Province of Cagliari created some dedicated interactive tactile panels and mutimedial supports, like Apps for smartphones and tablets for the following churches: